Home > Greg’s Tips The man with the handlebar moustache

The man with the handlebar moustache 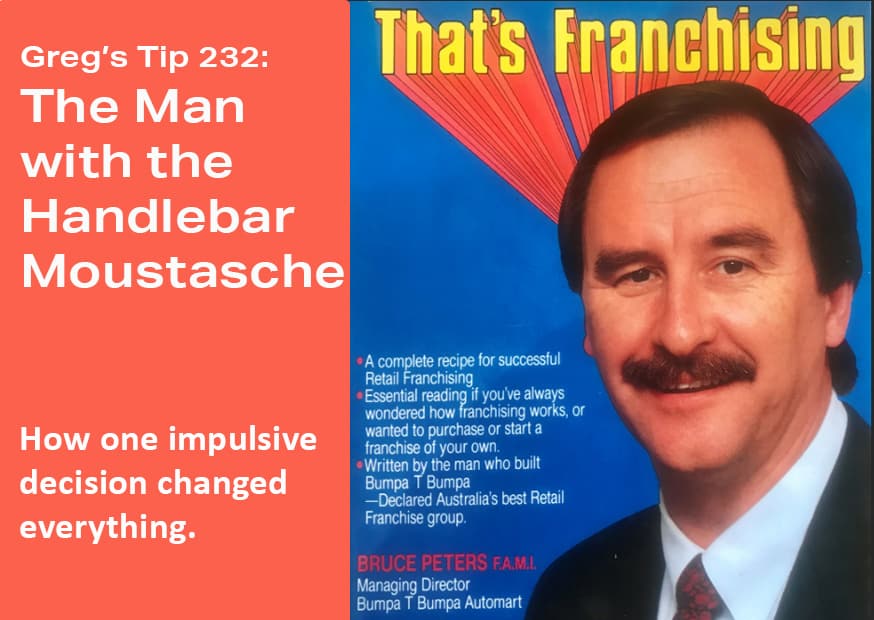 If you have ever started a business from scratch, you will know how hard it is to find customers who will put their trust in you. In 1989, I left my job as Head of Marketing for one of Australia's pioneering franchise networks, got married and travelled to Brisbane with my bride to start a new life and a new business with three psychologist friends.

While we had no clients and no money, we did have a lot of enthusiasm, and the goodwill of a doctor colleague, who gave us rent-free use of some rooms in his surgery. Our accountant told us to say yes to anything that could generate cash flow, and we slowly brought in some revenue from counselling and local government work. But it was tough going and we were barely able to scratch a living for the first six months.

While I had identified an opportunity to help franchisors and franchisees improve their relationships, my partners were sceptical. One morning I attended a franchise networking breakfast. The closing activity was an auction where a well-known franchisor Founder, Bruce Peters, who had a signature handlebar moustache, was to shave off his prized lip foliage for charity. I didn't know anyone at the breakfast and it had been a struggle to convince my partners to even agree for me to pay the $15 registration fee. So, as the auction started, I sat back as an interested bystander.

"At this point an awkward pause fell over the room"

At this point an awkward pause fell over the room and it seemed everyone was skilfully avoiding eye contact. I looked up at Bruce. His eyes were also downcast as he shuffled uncomfortably in the chair. I thought about how brave this guy was putting himself up there. And with a gulp I tentatively raised my hand.

Phew! A man on the other side of the room put up his hand. But then things stalled again. At this point the auctioneer gave a pep talk, and the bids painfully edged their way up to $190. But then nothing.

All I could think of was how Bruce must have been feeling as he sat awkwardly on display. I don't know how much he thought his moustache would bring, but my guess it was more than $190.

I can't logically explain what happen next, but the words "Two hundred and fifty dollars" leapt out of my mouth. All eyes shot in my direction, the auctioneer quickly seized the opportunity, and down came the gavel. "Sold to the young man in the grey jacket for $250!"

Bruce looked up and gave me a smile. I was overcome with embarrassment. Not only was this the first auction I had ever participated in, I wasn't sure how we were going to pay the $250, which 33 years ago was no chicken feed.

After being given details of where to post the $250 cheque, I awkwardly headed for the door and drove back to our borrowed rooms. While I thought of not telling my partners what I had done, I fessed up later that morning, and subsequently received what could be best described as a severe psychological beating. "You what? Are you crazy? How are we going to pay for this? A moustache? How ridiculous. And you're supposed to be our business manager!" To keep the peace I decided to pay the $250 out of my personal savings.

"Sometimes you have to follow your heart and back yourself"

A few days later I received a phone call from Bruce, who invited me to his offices for lunch. To cut a long story short, his franchise network, Bumpa-T-Bumpa, became our first franchisor client, generating, by far, more revenue that year than any other client. As you may have guessed, the business partnership didn’t survive, but Bruce and his company Chairman, Bob Peterson, became great supporters of my work, recommending me to many clients. The following year, Bruce published a popular book on franchising, featuring me as "franchising's best-kept secret".

The point of this story is that we all need supporters to help us get a leg up in business, particularly when we are setting out. And sometimes, you have to follow your heart and back yourself on decisions that just seem right.

That morning, my only thought was to help Bruce save face. I never expected anything in return. While he has since passed on, his legacy remains as his network has been bought and sold several times, and I still remember with gratitude, the generosity and trust that he and Bob Peterson placed in me.

I'll finish with an apt quote from President Theodore Roosevelt (often referred to by Brene Brown).

“It is not the critic who counts; not the man who points out how the strong man stumbles, or where the doer of deeds could have done them better. The credit belongs to the man who is actually in the arena, whose face is marred by dust and sweat and blood; who strives valiantly; who errs, who comes short again and again, because there is no effort without error and shortcoming; but who does actually strive to do the deeds; who knows great enthusiasms, the great devotions; who spends himself in a worthy cause; who at the best knows in the end the triumph of high achievement, and who at the worst, if he fails, at least fails while daring greatly, so that his place shall never be with those cold and timid souls who neither know victory nor defeat.”

To receive Greg's Tips straight to your inbox, subscribe here.

To find out more about our professional development solutions for your franchisor teams, click here.

If you are a Boomer or Gen Xer you probably remember the movie, Patch Adams. It's the inspirational true story of physician, Hunter Adams, (played by Robin Williams) who sets
Read More

Enlightening Tips from a Professor of Productivity

I arrived 15 minutes late due to an unrealistic back-to-back meeting schedule, ironic given the webinar was on solving work overload problems. But I was quickly in the groove, listening to Bob Pozen's
Read More

The 60/40 Rule for Improving Relationships

A few weeks ago, I attended the wedding of my nephew. It was a beautiful event held in the forest on a mountain top near my brother’s home. As we waited
Read More